RAC Facts: The Anatomy of a Medicare Improper Payment

The Anatomy Of A Medicare Improper Payment

Last week the Senate Finance Committee met to discuss government-wide improper payments, which have risen to a shocking $124.7 billion. In particular, Comptroller General Gene L. Dodaro, head of the GAO, told the Senate that the federal government could substantially improve its fiscal situation by cleaning up improper payments in three key areas, including Medicare.

The Medicare Fee-For-Service improper payment rate is at an all-time high of 12.7%, equating to a loss of $46 billion of taxpayer dollars.

Fig.1: 2014 Projected Improper Payments (in Billions) by Type of Error and Clinical Setting 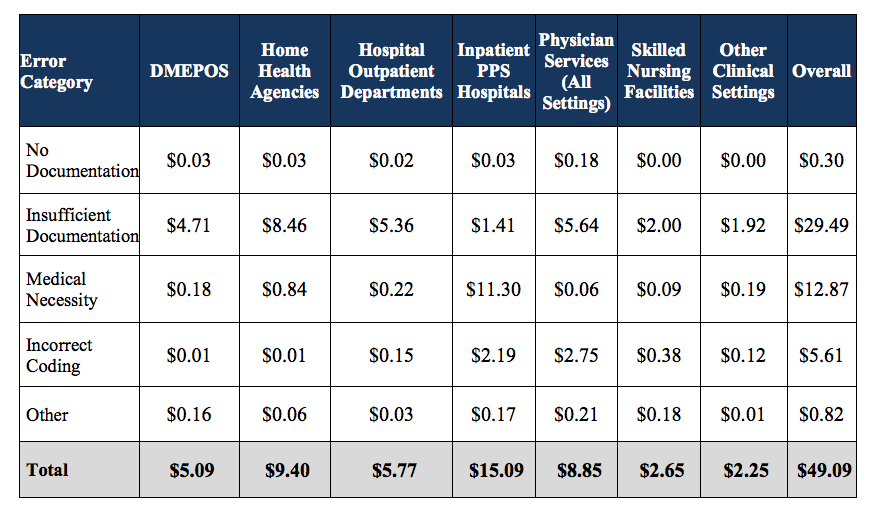 There’s a great deal that can be done to identify and recoup many of the billions of misbilled taxpayer dollars lost each year due to improper Medicare billing. Some Medicare billing areas are improperly billing on an incredible scale.

For example, a recent OIG report revealed that Medicare paid $30 million for ambulance rides for which no record exists that patients received medical care at their destination. Additionally, another recent OIG report showed that Skilled Nursing Facilities billed for the highest level of therapy causing one-quarter of the industry’s 2009 claims to be improper, resulting in a loss of $1.5 billion to the Medicare Trust Fund.  Clearly, taxpayer dollars are being wasted at increasingly high rates, putting the future solvency of Medicare in question.

The Medicare improper payment rate has consistently risen for the past three years due to an epidemic of claim inflation or lack of compliance by providers.

As Senator Wyden stated at the hearing, “Every taxpayer dollar lost to mistakes — no matter the cause — is a dollar that’s not available to help seniors cover medical costs, put a student through college, or rebuild our aging infrastructure.”

Medicare Solvency Is Vitally Important.
Financial Losses From The Program Cannot Be Overlooked.